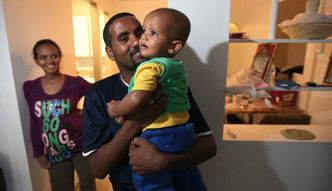 "We don't agree with the federal government's cut because it's hurting families and will lead to longer-term and more expensive problems," Health Minister Theresa Oswald said Wednesday in a prepared statement.

"In uncertain economic times, we are going to continue to ensure that families in Manitoba have access to health-care services, including preventative services that have been affected by these cuts."

Agencies and advocates for privately sponsored refugees and health-care providers have rallied against Citizenship and Immigration Canada's cuts to supplemental health benefits that took effect June 30.

On the eve of Canada Day, Ottawa stopped covering supplemental benefits for privately sponsored refugees during their first year in Canada. Their sponsors were left to pay for any prescription drugs, prosthetic limbs, wheelchairs, vision and dental care they needed. Otherwise, they would go without.

"This was a big problem," said Aman Ghebrezgiabher, who has one leg shorter than the other, Type 2 diabetes and hypertension. The young father said he is doing everything he can to maintain his health through diet and exercise. In an interview with the Free Press, the refugee from Eritrea said he simply can't afford not to.

His pregnant wife, Selam, due in October, and their 17-month-old son, Naod, arrived in Canada in July, just after the federal government cut supplemental health benefits for refugees.

"Everything is expensive," said Ghebrezgiabher, still looking for work and trying not to hound his sponsor to cover more medical expenses.

It's likely going to get costlier. He's awaiting test results to see if his diabetes has progressed to the point that he needs insulin. He needs an orthotic boot for an injured leg, five centimetres shorter than the other, that never received proper treatment. It's put his hip joint out of whack.

Help for someone such as Ghebrezgiabher and his young family now will save Manitoba money down the road, said a Winnipeg family doctor who rallied this summer against the federal cuts with hundreds of health-care providers.

"We can anticipate and avert some of the problems before they start costing us tons of money," said Dr. Mike Dillon, who has worked with refugees for decades.

"I want to give full credit to those Manitoba departments who recognized this as a concern and for picking up the slack. Overall, people are going to be better off and cost the system less. It's a good investment in people and in the future."

Normally, the province doesn't support privately sponsored refugees except in cases where their sponsor has abandoned them. In the current situation, the province maintains the federal government is like a private sponsor who's abandoned their refugee-sponsorship agreement, and Manitoba is stepping in to help.

"Up until now, Employment and Income Assistance (EIA) only intervened in situations of sponsorship breakdown," a provincial spokesman said. "With the federal government abandoning their support of these agreements, EIA has had to consider this a sponsorship breakdown, and the simple answer is they need to apply for EIA."

Refugee-settlement agencies are spreading the word about the province's initiative. "Now this is really great news," said Carlos Vialard, manager of settlement services at Welcome Place. "For us now, it means getting information to all the staff here and all the people working with privately sponsored refugees."

Oswald said the province will add up the bill and send it to the federal health minister. "We're going to track the costs for providing that care and will follow up with the federal minister regarding her government's responsibility to pay."

Manitoba's largest private sponsor, Hospitality House Refugee Ministry, has taken the federal government to court for breach of contract. Ottawa has until Sept. 27 to file a statement of defence.