'This is the reward for the work we do' 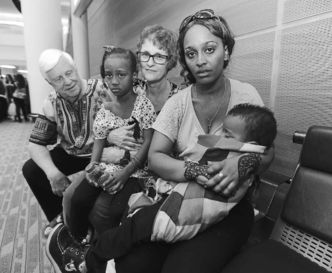 Some people celebrate their birthdays at a party with cake and friends.

For two Winnipeg seniors who share the same birthday and the same mission, there's no better place to celebrate than Richardson International Airport with complete strangers.

"This is the reward for the work we do," said Tom Denton, executive director of the Hospitality House Refugee Ministry, who turned 80 Thursday. He and Karin Gordon, who's in charge of resettlement and turned 68, welcomed a single mom and her two young children who were sponsored by the faith-based charity they work for full time.

"I bring the refugees here and (Gordon) looks after them once they get here," said Denton.

This week, 42 refugees from Eritrea, Ethiopia and Somalia landed in Winnipeg. Hospitality House has seen a record 56 arrivals a month this year as Citizenship and Immigration Canada works through a backlog of private sponsorship applications. Some of the new arrivals had been waiting four years for their application to make it through the system.

"These people have come from incredibly difficult circumstances overseas," said Gordon, who hugged five-year-old Diliat and held her on her knee after the long and exhausting journey to Winnipeg with her mother, Semhar Solomon, and two-year-old brother Yobel. The family is Eritrean.

"It's wonderful to be part of that and to know we made it possible," said Gordon, a grandmother, who's been known to work 14-hour days, helping newly arrived families get settled, taking them to apply for medical coverage, registering kids for school and solving other problems.

Solomon and her two kids were also met at the airport by their relative, Michael Hagos.

"I'm very happy because I keep waiting for them and asking 'What's happening with their files,' " he said.

Beyan Nurahmed, who fled Eritrea after doing 15 years of unpaid military service, was met by Denton, Gordon and a relative, Nureldin Ahdego, a Winnipeg cab driver who sponsored him through Hospitality House.

Denton said Nurahmed is one of the estimated 40,000 privately sponsored refugees who've arrived in Winnipeg during his time in charge of Hospitality House.

The faith-based organization is the largest private sponsor of refugees in Canada with thousands of applications that Denton doggedly jockeys through the immigration system. "We have a horrendous workload," he said.

The board of Hospitality House hasn't thought about what they'd do without Denton and Gordon.

"We're almost awestruck sometimes with the numbers and with these endless phone calls, emails, walk-ins, advocacy and they deal with legal matters," said co-chairwoman Marlene Reguly. "We haven't really talked about who would be the successor."

During the years, he's seen boat people from Vietnam arrive with nothing and families fleeing Central America with all their worldly goods in a single garbage bag.

Lately, it's families from the Horn of Africa arriving with many suitcases.

"They're refugees who were stuck in Africa for a number of years," said Denton.

"Wherever is the hot spot -- the trouble spot -- we see them coming. It's created the Canadian mosaic we're so proud of today," said Denton.

"The sad thing is there are 51 million refugees," he said. "It's appalling. We can only do a little but we do what we can."